One of the more popular franchises on HGTV is the “Tiny House” programming block, which has grown to include four different shows all devoted to the notion that living small doesn’t mean you have to make design sacrifices.

Locally, the 1960s-era Palm Canyon Mobile Club has taken this mantra to heart and given it a distinctly Palm Springs spin. Ravinia Communities, which owns multiple mobile home parks across the country, has acquired the community and is planning to add approximately 100 new “micro homes. 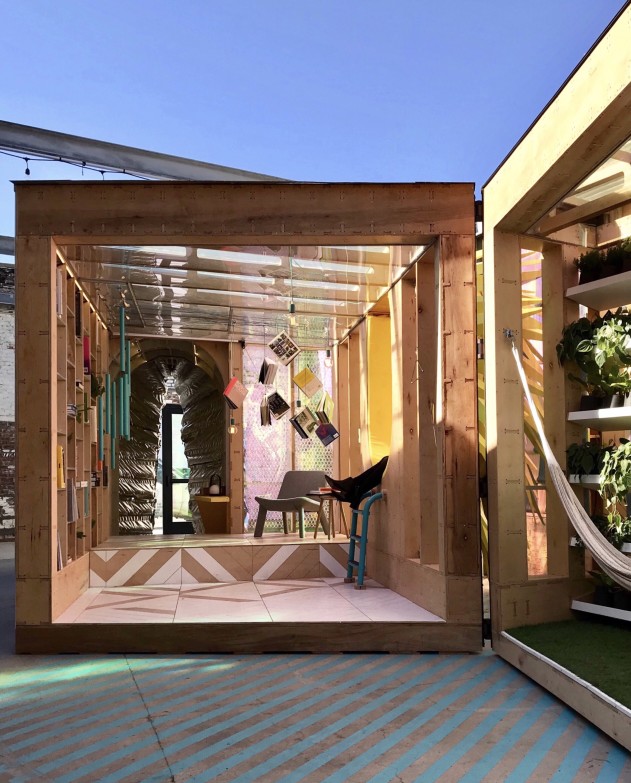 Although they’ve never done anything like this previously, they were open to thinking outside the box and thought it would be beneficial to provide this unique housing product not currently available in Palm Springs.” 1/4 Five of the new micro homes are currently on site and an additional six will join them by early July. Five of the 11 micro homes are approximately 600 square feet with one bedroom and one bath, while the others are two-bedroom, two-bath floor plans with approximately 800 square feet.

The homes don’t feel small when you’re inside them. The abundant use of windows with glass
sliders that open to the outside, plus clerestory windows and the nine-foot-high ceilings, make the homes feel light and bright—much larger then their actual footprint. I also love how efficient the design of the floor plan is. Even though it’s small, there’s great separation from living areas and the bedroom area with no wasted space.

Placing the micro homes on a traditional double wide lot allows for a large private outdoor
space.  Clerestory windows and nine-foot-high ceilings make the homes feel light and bright. Shown here is the interior of a one-bedroom residence.  The kitchens include such features as solid surface countertops (Corian or quartz, depending on the plan), Shaker-style cabinetry, and stainless steel appliances—a full-size cooktop range, built-in microwave rangehood, multi-cycle dishwasher, and double-door refrigerator. 3/4 Silvercrest, a Corona-based company located about an hour from Palm Springs, is building the micro homes. They’re one of the biggest manufactured home builders in Southern California [and] they were willing to work with us to customize the homes the way we wanted. I designed the floor plans, working with Silvercrest, using their available finishes, plus mass produced building elements, and incorporated that into our final design. We also worked with H3K, a local design firm, on the interior design finishes and the exterior improvements.

The homes are built in [the Silvercrest] factory, using similar construction materials as a stick-built home and are built to Department of Housing and Urban Development housing standards.
The one bedroom homes start at $126,000 and include a front porch, covered carport, private fenced yard, plus two balcony-sized decks off the bedroom and living room. The two bedroom houses are laid out similar to the one bedroom, except that an additional bedroom and bathroom have replaced the front porch. The two bedroom homes, with a double tandem carport, are currently available for $150,000. All of the houses have private, gated backyards.

The master bathrooms include a large walk-in shower with a glass enclosure.  Some of the homes will feature upgraded finishes such as tile flooring, quartz kitchen countertops, tile shower enclosures, [and] mirrored wardrobes, to name a few. They also include larger decks. Currently, the one bedroom model home, which has all the upgrades, is priced at $170,000. An upgraded two bedroom will be
listed at $190,000.

Ravinia is updating the electrical infrastructure for the entire park and renovating the private clubhouse, which will include a workout room. The community pool, spa, and barbecue areas are also being renovated and a new dog park with a separate area for smaller dogs is currently under construction. Call me for Tiny Homes or a Tiny House in California

MAX OUT your Home Value before you sell in Santa Monica CA Appraisals for Buyers and Sellers – Beware!