Why Saltwater Pools Are Much Better Than…

If you hate the stink and sting of chlorine, you’ll love saltwater pools. 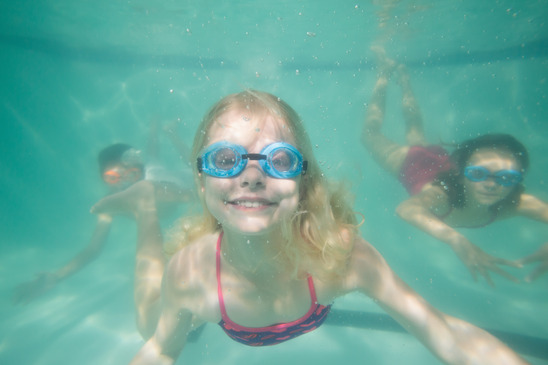 Once primarily a perk in health spas and resorts, these pools have now become popular among U.S. homeowners. Today, about 30% of all U.S. in-ground pools are saltwater.[/caption]

“They’ve literally exploded in popularity in the last decade,” says Erika Taylor of “Pool and Spa News.” “It really does make a difference in the way the water feels on your skin. Nothing feels as good as jumping into a saltwater pool.”

More: How to Care For Your Pool Naturally

Freshwater pools depend on store-bought chlorine to disinfect water and keep it free of algae, bacteria, and other health-harming organisms.

a Saltwater pool relies on an electrolytic chlorine generator (ECG). The generator separates the salt in the pool water into its two primary elements, one of which is chlorine. The chlorine is then circulated into the pool to sanitize and disinfect the water.

The big advantage is that the process doesn’t produce chloramines, an irritating byproduct of the store-bought chlorine traditionally used to disinfect pools. It’s the chloramines that give swimming pools that “chlorine smell” and sting eyes.

How Salty Are Saltwater Pools?

A Saltwater pool isn’t salty like the ocean, says Ray Denkewicz of Hayward Pool Products, a manufacturer of salt chlorination machines. Seawater has concentrations of salt of about 35,000 parts per million (ppm).

A Saltwater pool has much lower salt concentrations of 3,000 to 5,000 ppm — about the saltiness of a teardrop. Pool saltwater closely resembles the water that naturally bathes eyes and therefore, doesn’t irritate them.

Debbi Welch, who owned freshwater pools for 20 years, switched to saltwater nine years ago and says she’ll never switch back.

“It’s unbelievable how much easier it is to manage a saltwater pool,” says Welch.

Low maintenance: Add a few hundred pounds of salt when you open the pool for the season, swish it around to dissolve, then turn on the generator and let it do its thing. No measuring, testing, or continuously dumping more commercial chlorine into the water — although you may have to add more salt during the season. Welch dumped 500 pounds of salt into her 36,000 gallon pool outside Knoxville, Tenn., in late April, then added another 40 pounds in July.

Feels great: Swimmers in these pools say the water feels silky and doesn’t sting eyes or discolor hair like the water in freshwater pools can.

This type of pool aren’t perfect, or perfect for every pool owner.

Cell replacement costs: Salt cells inside the ECG should be replaced periodically: sooner (4 to 5 years) if you use your pool year-round; later (maybe 10 years) if your pool season is only a few months a year. A cell costs $200 to $600.

Salt corrodes: Saltwater can corrode anything in or around your pool that contains metal, like lights, heaters, screws, diving board attachments, and patio furniture.

Salt stains: Saltwater splashing on soft stone on pool coping and decks can leave stains and pockmarks. Apply a sealant to solve this problem.

#ThomasRayAgent
Homebuyers, Sellers Stuck in Neutral — This is Yuuuge! Real Estate Purchase in the Fall? Better than the Spring now.